The toga was the defining garment of the male Roman citizen, and Romans prided themselves on being the gens togata, “the race that wears the toga”. The most informative ancient source on the shape and arrangement of the toga is a section in Quintilian’s Education of an Orator (Institutio oratoria 11.3.139-48), which we supplement with the evidence of statues, reliefs, and paintings.Toga Much remains uncertain, however, due as much to changing fashions and personal styles over the centuries as to the vagueness of our sources on important matters that in antiquity were taken for granted. 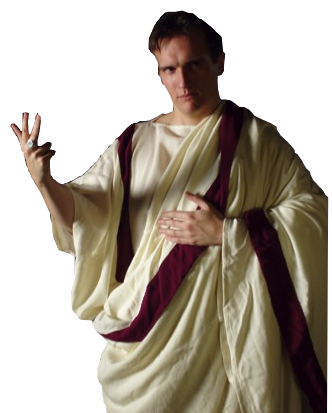 r the UCLA performance was modeled on fig. 16, “Large Toga of the Republican Period”, in the standard reference, Louise Wilson’s The Roman Toga (Baltimore, 1924), p. 121. Our toga measures approximately 8 ft. by 16 ft. The tunic worn underneath is rectangular in shape, with neck and arm openings and without added sleeves. It is 3ft. 4in. wide and 3 ft 8 in. long. Since the toga has a senatorial stripe, the tunic underneath is not cinched (Quint. Inst. Or. 11.3.138).

This toga was planned and constructed by Karen Gunterman, then a doctoral candidate in the Department of Classics. Before returning to the academic world, however, she worked as a pattern maker in the garment industry. Making the toga provided an opportunity to apply this experience to her interests as a classicist.

Finding suitable material for such a garment in the modern marketplace can be difficult. Ms. Gunterman explains her procedure as follows:

“Even allowing for a sculptor’s stylization of the folds, I believe the surviving statues of togate figures reflect the soft drape of the loosely woven cloth from which togas were made. I therefore looked for a fabric that would drape as do the togas on these sculptures. 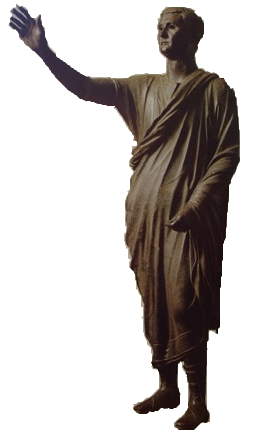 The way the toga hangs on the sculpture affects our sense of the fullness of the fabric, and this in turn is the basis of judgments about the amount of fabric used and the shape of the garment. As a starting point for evaluating current arguments about the shape and construction of the toga, I sought to reproduce the drape in my toga. To this end, I used a wool blend crepe, which falls much like the light weight woolen fabric I would have preferred but could not find. I pieced the toga with vertical seams at the selvages so that the warp threads hang in the same direction as in the hand-woven originals. The purple border is attached as an extension of the toga to avoid doubling the thickness of the fabric. The stripes on the tunic would have been woven into the fabric of the Roman originals, but here they are set in. I used a sewing machine to join the seams and to finish the hems, but given the direction of the seams, I don’t think this greatly affects the hang of the garment. When properly arranged on a model, this finished toga seems to me to satisfactorily resemble the statues of the late Republican period.”

H. Granger-Taylor. 1982. ‘Weaving Clothes to Shape in the Ancient World: The Tunic and Toga of the Arringatore.’ Textile History 13: 3-25.